Buckinghamshire housewife Mrs Bledwina Blighty has been arrested in the Peak District on suspicion of the attempted murder of her husband.

According to our sources, Mrs Blighty had been acting strangely, recently increasing her husband's life insurance cover.  It is also reported that relations between the couple had been strained in past weeks due to what Mrs B described as "that bl**dy motorbike film".

Witnesses told police that Mrs Blighty insisted her husband accompany her on what she described as "a lovely, peaceful hike". 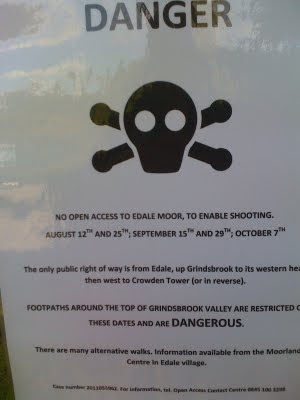 In a bizarre twist, it appears Mr Blighty is standing by his wife and will help her to clear her name.

Speaking to reporters outside Chesterfield police station he said, " I am confident this misunderstanding will be cleared up soon.  Bledwina only insisted that I wear a tweed deerstalker decorated with a number of feathers is so that I would fit in in the countryside; I was a little taken aback when she opted for a flak jacket and a tin hat but I respect her sartorial choices."

Email ThisBlogThis!Share to TwitterShare to FacebookShare to Pinterest
Labels: Boys 1 and 2, holidays, Mr B