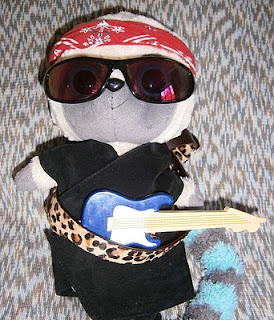 The other night I went with Mr B to see his old favourite group Echo and the Bunnymen play.

When I mentioned this recently to anyone, they looked a bit blank and then said, " Oh, yes, Echo Beach."

Nooooooo! That was quite different, that was Martha and the Muffins.

The Bunnymen are a rocky, moody, sort of post punk band with a charismatic Liverpudlian lead singer called Ian McCulloch.

Their best known song is "Killing Moon", featured on the soundtrack of  the film " Donnie Darko".


Must admit, prior to the event I was not terribly enthusiastic as I knew Mr B used to go to gigs wearing a greatcoat and pointy shoes and with his hair all spiked up, and it all sounded a bit goth and gloomy to me.

In fact, it was brilliant!

It was a thrill to skip off up to London on a school night and meet up with Mr B.  And the concert was at the London Palladium, a theatre I last visited for my 8th birthday to see Cliff Richard (bless  Grandma W, she organised that for me, what a nice mummy).  So it was great to see the inside of the Palladium again and bang on to Mr B about seeing Cliff and Olivia Newton-John, while Mr B carried on a parallel monologue about last seeing the Bunnymen at the Glasgow Barrowlands in 1984..not quite sure whose anecdote had the most street cred, mmm, tricky one..

The Bunnymen were good, really good -  a very tight band - and Mr McCulloch can really sing.  And what confidence, arrogance, to sing in front of all those people !   He was a real character - he took a lot of liquid refreshment between, even during, songs, we were a long way from the stage but the bets were on Guinness, with whisky chasers... a soothing vitamin drink and mineral water.


Here's them doing The Killing Moon  back in the 80s. They did it brilliantly last night too, they just look a lot less boyish!


And now dahlings, I am off  for a cheeky nap on the sofa - it's very tiring being a rock chick at my age.
Posted by Blighty

Email ThisBlogThis!Share to TwitterShare to FacebookShare to Pinterest
Labels: debauchery, Mr B, music