Mouth Guards And Other Daphnes4Boyz News

Just two days ago Boys 1 and 2 returned to the country club cunningly disguised as a school, known as Daphnes4Boyz*. Of course, now it's the weekend, so we are having a well-earned break..again..don't want to burn ourselves out too soon..

To keep us poor befuddled parents on our toes there have been a few changes:
The Library is now the Drama room/second dining hall;
The Drama studio is the now the Library;
The School Uniform Shop is now the Geography Room;
The Store Cupboard is now the School Uniform Shop;
The Headmaster has swapped offices with the Bursar;
The Bursar is now a man**;
No motor vehicles*** are allowed to drive through the school, except the school minibus which will bear down on you unexpectedly just as you are bending down to tie up Boy 1's laces;
Mr Gummage the Science Master's hair has changed colour., to darkish brown with alarming gingery undertones.

Other things remain the same:
the Changing Rooms remain on an entirely different Time Zone to the rest of the school - 5 minutes inside their humid portals equals 1hour 10 minutes in the outside world; for example, Boy 1 "pops in" to collect his kit mid-September and comes out just in time for Christmas...
the amount of kit required by each boy equals body weight of boy x 5 kilos + 2 bricks + weight of one medium sized classmate gagged, bound and shoved in bag but deduct engine size of Range Rover or other deluxe 4x4  but add on weight of  1 cement mixer if you walk home.. 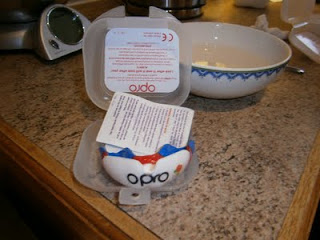 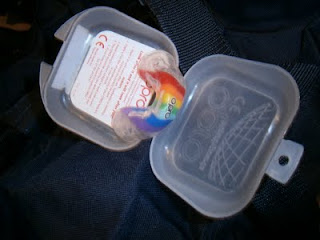 Here at Blighty HQ we have been thrown into despair and dismay by the non-fitting of Boy 2's fancy schmancy bespoke mouth guard****, needed for that violent mudfest called Rugby. The mouth guards arrived, moulds having been taken of small boys' mouths - quite which small boys I know not..  Cue application of boiling water (to mouth guard of course), attempts at remoulding (mouth guard, not Boy 2), wailing, shrieks of agony, predictions of thwarted rugby glory etc.


Never mind.  Another change is that there is now a MAP, yes a MAP of  the playing fields which will be written up to allow parents to work out exactly which pitch their son is playing on. 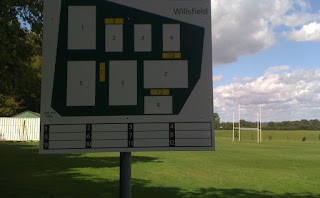 No longer will I have to wander around the entire playing field trying to spot my offspring - let's face it, they all look the same in the mud, all arms and legs and pinky-white and jiggling about...

Damnation!  I can no longer claim to having arrived on time for the match but to have been terribly delayed by  not being able to locate the exact pitch..

*formerly known as Daphnes4Boy$ but rebranded over the summer hols due to the US debt crisis and the loss of that country's AAA credit rating, payment of school fees can now be made in gold or copper.
** result of new appointment, not gender reassignment.
*** legacy of Archgate - when delivery lorry over-optimistic about height of arch linking school buildings so took a few important bits of the arch with it on its way through.
****it seems this blog is in danger of turning into an outpost of the British Dental Association.
Posted by Blighty