Day Out with the Big G

So the Boys finally went back to school after their epic holidays. The headmaster was a bit surprised when I dropped them off at 4am on the first morning but I wasn't taking any chances.

The house was horribly quiet. Spooky. Grandma (my mother, aka the Big G) and I decided to have a jaunt up to London, as we had cabin fever and needed a bit of Culcha (note to self: not a small town in southern Spain).

We chose the Courtauld Gallery at Somerset House, as the Big G had never been there before. We bravely took buses from the train station to get there. All went to plan except for sailing past the gallery and being carried off across Waterloo Bridge, the other side of the Thames. I had visions of us ending up in Peckham. (By the way, a well informed friend tells me that young Londoners now speak Jafaican, not Cockney; Grandma and I tried to get in the swing ("well sick innit") but really couldn't pull it off).

After our busnapping ordeal, we repaired to the gallery cafe for an restorative hot chocolate. For me the most important part of a museum is its cafe. You can only take Culcha so far.

I liked the teapots on display. 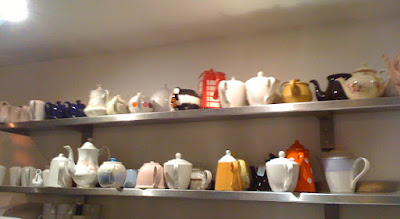 The Big G then forced me to stop admiring the teapots and go up to look at the pictures. I immediately lost focus and stared out the window at the ice rink. They have an ice rink every year around Christmas time. 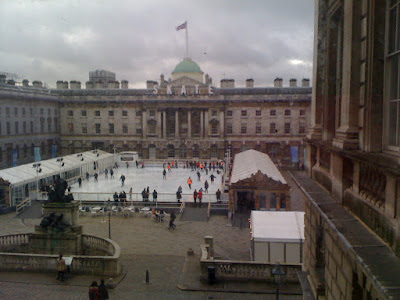 In the gallery there was a lot of top stuff. Grandma and I agreed that Renoir is too chocolate boxy. 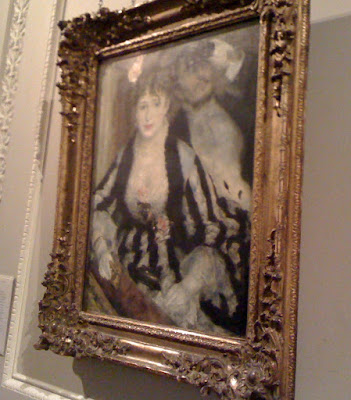 I have always liked this one. 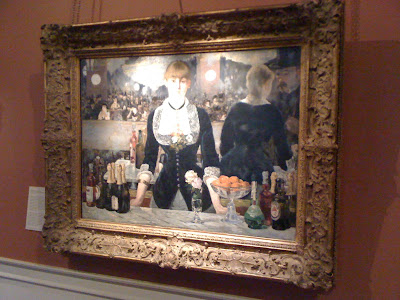 This is one of Cezanne's Mont St Victoire pics. He always seemed to be painting that hill. I could see Mont SV from the window of my room when I was studying in Aix en Provence. But mainly I could see the caretaker's teenage daughter climbing over the fence to sneak off with her friends. 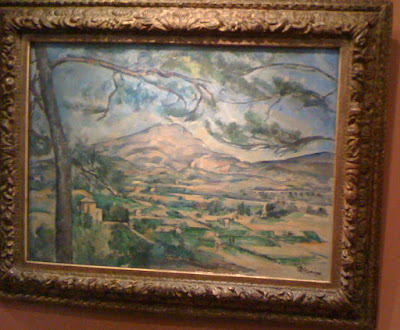 Here is a Blighty Elf and Safety Announcement: this is not the way to hold a baby. I don't care if it is the Baby Jesus, he could so easily roll off onto the floor. A huge bump on his head will stop his halo fitting properly. 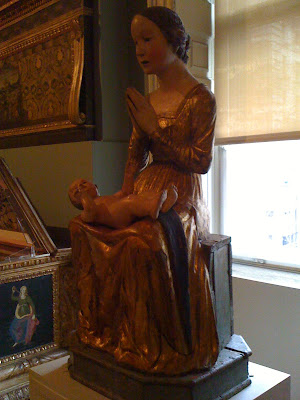 On the way out I spotted this Tiffany pop up shop type thing. Grandma firmly steered me past it, lest I was tempted. 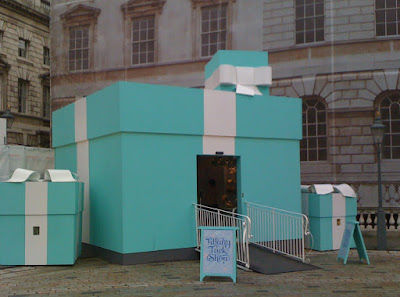 This reminds me of other important news. Mr B, who has been working like a dawg at his office drafting an important new law on supertax on confectionery for the under 5s has now managed to Get It Out and has reemerged from his office. I explained to the boys that the familiar looking chap wasn't the plumber, it was their father. They took it quite well.
Mr B, feeling guilty at his absence, suggested he make it up to me by taking me somewhere nice, somewhere I would really like, but warned me not to get too excited, it would not be the Rolex shop. Well, I thought, if not Rolex, maybe a little Hermes scarf or at least a little toddle round Selfridges? "Oooh Blighty", I sighed, "please tell! "
This was his answer - I am NOT making this up:
"Borehamwood Vehicle Licensing Office."
Who said romance was dead?
Posted by Blighty