When I claim to having been kidnapped by aliens (usually forcing me to go shopping instead of carrying out housewifely good deeds), I am not being exactly truthful.

The reality is that I am not so much being abducted as being contacted by my own people. Over time, I have come to realise that I am 30% human, 20% chocolate (85% cocoa bean), 20% arithmetically challenged, and 70% Dorkoid, from the Planet Dork.


Recently there have been many moments when my home planet has called me.

Planet Dork strikes back - Part 1
A while ago we hired a tree surgeon to cut down some trees in our garden. I was terribly impressed by the whole set up - chainsaw, climbing up trees, ropes, pulleys. I spent ages staring out of the window in a sort of delirium treemens. (Stop it, you have been warned about these godawful puns). Every time Treeman looked up, there I was with my mouth open, staring. But I think I got away with it, he probably just thought I had spent too much time watching daytime TV or had seen something nasty in the woodshed as a child.

A few months later Treeman returned to lop bits off our neighbour's tree. I spotted him high up in the branches of an oak. I decided to get a photo, but mindful of my earlier behaviour, I resolved to be subtle about it. I crouched down in Boy 1 's room, to take the picture unseen. After a bit of faffing about with the camera I looked up. It was then that Treeman gave me a jaunty wave. Being so high up he could see exactly what I was up to. Caught out, I sheepishly waved back. I then opened the window and shouted out the first thing which came into my head: "I'm not a pervert, honestly, I have a blog.." 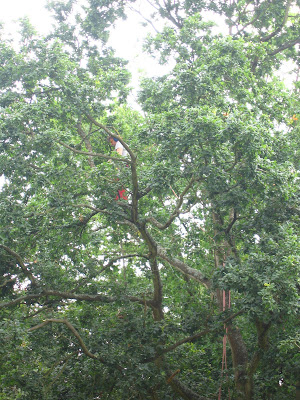 Treeman hiding from Mrs Blighty; we are hoping he will feel it is safe to come down soon..


Part 2 - The Dark Hallways of Dork
During his summer hols Mr Blighty seemed always to have workmen round to quote for work on the house. One evening it was the flooring guy's turn. I left it to Mr B. There was a lot of discussion of sub-floors and sanding. I was busy doing supper (flame-thrower and drills) and encouraging the boys to play nicely together (straitjackets and Tasers). Then Mr B called me into the hall to consult me. I went up and leant casually against him, in a cosy, wifely sort of way. Except it wasn't him. It was Floorman standing next to him. I was somewhat surprised; Floorman got a hell of a shock. Mr B just looked resigned. If I explain that Floorman is the same height as Mr B and also wears glasses..no, still Dorkonian and worrying that I can't recognise my husband even in my own hallway. And god help me if Treeman and Floorman ever compare notes..


Part 3 - Deadly Kiss of Dork
I recently read in some magazine that lipliner is the way forward if you want your lipstick to last. I knew I had some Chanel liner from ages ago. One morning before I took the boys to school I decided quickly to "do" lipliner. I was surprised how dark it was coming up, it had been a natural beigey-reddy colour, it must have darkened with age; never mind, I kept on. Gosh, really dark, very Goth, I needed to tone it down a bit. How odd. It was then that I looked at the pencil. Chanel - yes, Lipliner - no, eyeliner, brown kohl. "Look what silly Mummy's done!" I trilled merrily to the boys. "You look weird" said Boy 1. Boy 2 just screamed. 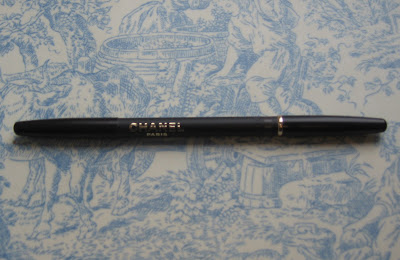 Part 4 - Dork hits rock bottom
We were staying with friends. I forgot my hairband/bath hat and needed something to keep my hair out of the way when washing. I improvised, very resourcefully I felt, by putting a pair of knickers on my head (clean ones, come on, I do have some standards). Mr B walked in. "Do you know you have a pair of knickers on your head?" he asked. And then " No, don't tell me, I'd rather not know.."

The Dimness of Dork
I was sitting reading one lunchtime and realised I needed to go back to the opticians, my reading glasses just weren't strong enough any more. Also I couldn't seem to get enough light on the page. It was only that evening that I noticed my sunglasses lying on top of my book.. 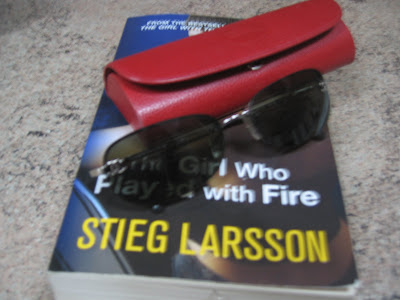 Is it just me? Or are there other migrants from Planet Dork out there? Anyone? Anyone at all?
Posted by Blighty