I have had consultants in who advise that I need to "refresh the Blighty blog offering, while at the same time capturing the Zeitgeist."  I can't afford to ask them what that means but have decided to do "something what like the other bloggers do but different."

It's been an eventful year.

Boy 1 dressed up in his new ski gear and burst into Grandma Whacker's room at 9pm. As Grandma commented drily: "It's a good job I don't have a heart condition." 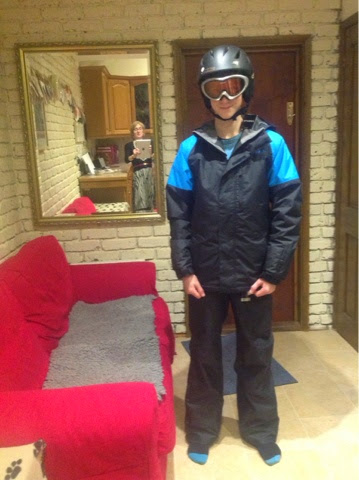 Having clocked up 3000 hours on the Xbox over the hols, Boy 2 put on his new daygo hockey boots and went to hockey practice. Hello outside world, hello long pale atrophied things which are my legs. 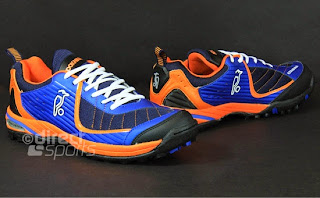 Mr B went back to the drafting factory to compose new and even more intricate laws (but still refusing to pop in that clause about the Blightys not needing to pay tax ever again  - I really question his contribution to our relationship, I mean, it's not much to ask, is it?)

Grandma de-camped to Casa Whacker, relieved to have some peace and quiet and not be pounced on by adolescents in ski-gear. Below, pic of the village in the Cotswolds where Grandma resides

Monty Dog staged a disappearing act.  He was gone for around an hour and a half, provoking a major search operation.  Eventually we had a call from a nice lady who had found him in her garden. She spent 20 mins trying to catch him.  He told me he had a lovely time, a super game of chase, and licked her kitchen floor and dishwasher by way of thanks. 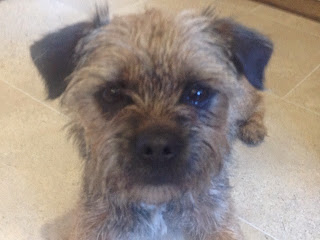 And as for me, I have made my debut on the Scarf of the Day thread of the Purse Forum...yes there is such a thing. It's a group where you post photos of your scarves according to a weekly theme set by the Scarf Mistress (I may be getting carried away with the names but it's all broadly true).  All the ladies are lovely and very appreciative of each others'  scarves.  It is very civilised and a nice refuge from teen world and dog days. I did notice in my Scarf Forum account details there is a category for "Infractions".  This is currently at zero.  I do wonder what exactly I will have to do to commit an infraction and how long it will be before I get thrown off the forum - posting rude jokes or vulgar double entendres?  I like a challenge. 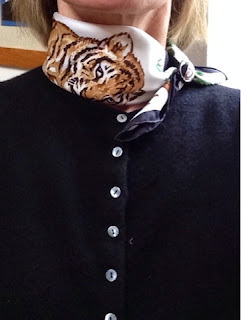 This is me posing with my chin up high to minimise chin sag.  I am not going to post on the Scarf Forum too often otherwise I will get RSI to my neck.

As the ladies are so nice, I  wonder if there is a parallel  "Dorian Gray painting in the attic" Scarf Forum for the Cruellas and other mean ladies of this world:
"Darling, don't take this the wrong way but that rag round your neck really brings out the colour of your eyes - red"
"Girlfriend's looking a bit haggard today" etc. 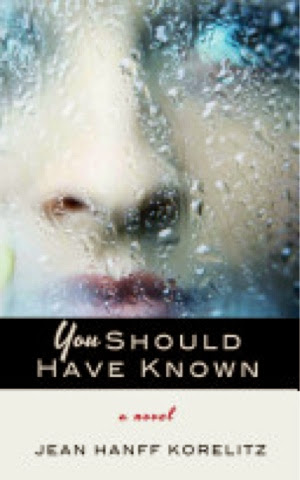 Read the above book - excellent psychological thriller, highly recommended - stick with it, a bit slow at start, author has to lay the groundwork, the pay off is worth it.   My friend S put me onto it, she always knows the best books to read. S is herself a published author as blogged previously.  If you haven't already read her book (below), get on with it!  There will be a test later... 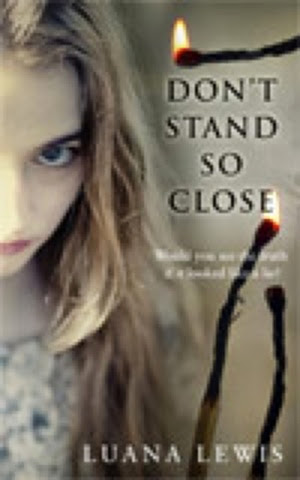 Talking of books, have just been to see Tess Gerritsen give a talk to promote her latest  Rizzoli and Isles book, Die Again.  She was an excellent speaker, super intelligent, funny, amusing anecdotes - including how she started as a romance author but decided to change direction when her editors pointed out that the body count for her debut romance novel stood at 13! Here's Tess in action. 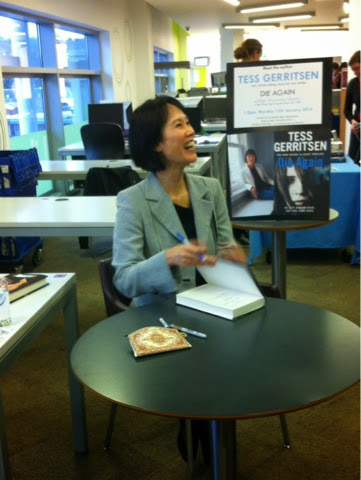