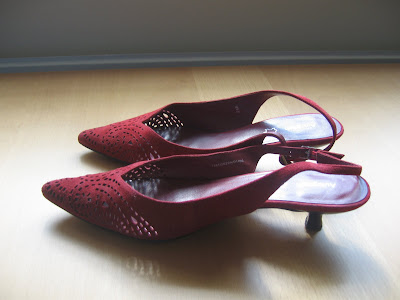 I was for a long time a huge fan of those articles in magazines telling me how to de-clutter my wardrobe. It all sounded so easy and liberating; making piles of "keep", "put away" and "charity shop"; the careful wrapping of clothes in acid free tissue paper and putting into boxes; the promise of only having a few select items hanging daintily on pretty padded hangers.

I even put it into practice, including the tissue paper, though I never achieved the magazine worthy "only 5 things in the wardrobe" look.

But even back then, I noticed that de-cluttering had the perverse effect of freeing me up to buy more stuff. So that for me it became part of the early nougthies disposable fashion phase.
Then strange things started to happen. Vintage got really big. Boyfriend blazers came into fashion and there was an 80s fashion revival. The economy stuttered and took a turn for the worse. And I found myself on the point of buying cheaper versions of garments I used to own but which I had disposed of in a de-cluttering frenzy. I started to wake in the middle of the night and groan when I recalled a really nice, good quality jacket I had sent to Oxfam, the like of which I could not afford now.
So maybe this is going against the Zeitgeist (not quite sure what Zeit thingie means but I do know the meaning of pretentious) but I have decided to become hopefully not a hoarder (too Miss Havisham) but a keeper of good quality clobber, because I am now convinced that things Will Come In One Day and I want to be able to Shop My Closet. And in doing so I hope to reduce my clothes buying (for which my husband, bank account and wardrobe would be most grateful).
Is there a point to all this rambling, apart from some off-chest gettage? Most likely not, but I did want to mention how heartened I was to read reports that kitten heels are due for a comeback.
Hot on the heels of this (ouch, the electronic re-education tag put on me by the nice people at the Commission for the Repression of Awful Puns has just gone off) I saw a recent post by The Glamourai, a very slick chick who is brilliant at mixing up patterns and textures and is expert in her accessorising. Her post entitled "Short Story" showed the shoes she had been wearing recently.
http://www.theglamourai.com/search?updated-max=2010-06-18T00%3A20%3A00-04%3A00&max-results=6

These in particular rang a bell with me: 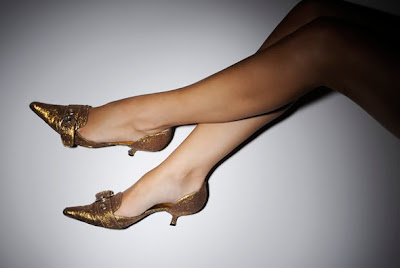 I rushed to my wardrobe, scrabbled around a bit, hit my head, swore and then emerged triumphantly with these. At last my (failure to keep on top of things) clever keeper philosophy is paying off! 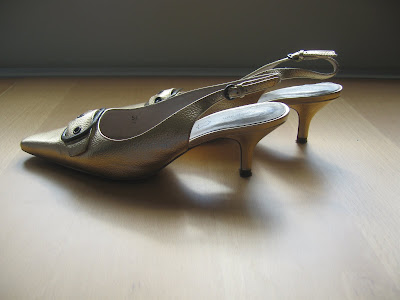 Of course, the Glamourai's shoes are Prada whereas mine are good old M and S (Marks and Sparks).
I found these too (when buying, I am never one to do things by half). 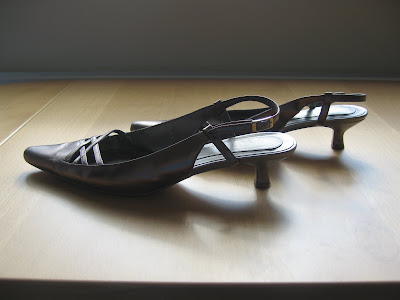 Also M andS, bronze, from a time when metallics were in.


At the moment I can't get used to the long pointy toes, they still look all wrong but given time....
As for de-cluttering, is the presence in my bookcase of an 8 year old book on the subject a sign that the book has worked or not? Shouldn't it have been de-junked too?? 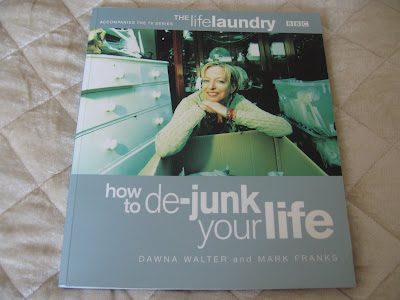