Reading between the lines with perfumes and Loulou La Bicyclette

As can be seen from the title, any attempt at well-thought out, themed posts has now been abandoned! Welcome to the world of Blighty's head, a place so muddled, it makes the inside of our garden shed look like a showhome!


Now the dust has settled a bit, I have had the chance to look through some of the piles of exercise books the boys brought home at the end of term. I suppose I should welcome the chance to wonder at my boys' academic endeavours. But, unfit mother that I am, my instinctive reaction is always "Jeez, all that paper, quick, where's the recycling bin?"
However, I did enjoy some bits of the work mountain.
First, Boy 1 shows great promise for a career in diplomacy, and has inherited his mother's tendency to Do a Joke to Death: 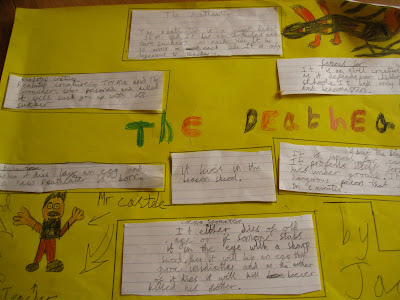 Above, he invents a mythical creature called the Deatheater. It only eats teachers. 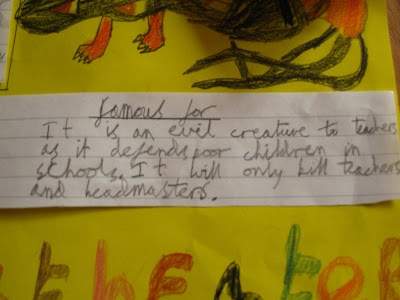 Got that? It only kills teachers and headmasters 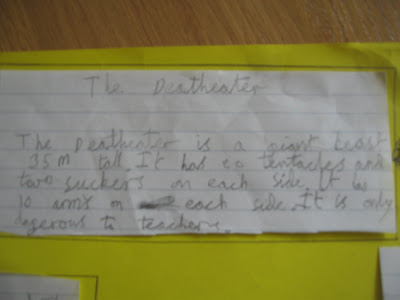 Just in case we missed it - only dangerous to teachers 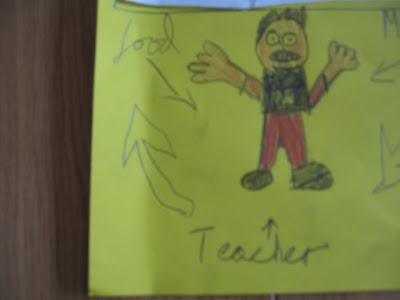 Let's be clear - teacher is food.

Next, Boy 2 demonstrates great cunning in the way he fills up the page by clever use of repetition, I foresee a career as a tabloid journalist or possibly a politician. 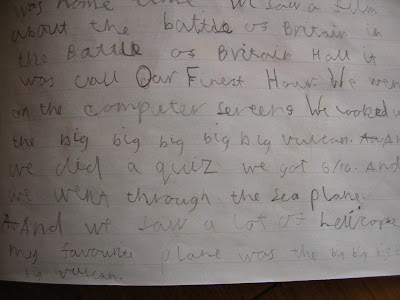 This is from Boy 2's account of a trip to see old WW2 planes at RAF base. Remember, whenever you mention an old war plane called a Vulcan, you put big big big big in front of it. Nifty or what?
Boy 2 has already got the hang of thrift, as practised by Blighty (no matter how many times Mr B explains to me that the best way to save money is Not to Spend It, I remain unable to ignore the siren call of the Bogof):

This is part of an account of what Boy 2 did in his hols:" we went to the shopping centre to buy some football there was a really good deal buy two get one free so we did it." Ha, my work bringing up that child is done!
Now I must broach a painful subject. Do you recall that ill-advised interview poor Princess Diana gave about her divorce - along the lines of there were three people in the marriage, it was a bit crowded? Well, there are three of us in my marriage. Here is my rival, Loulou. She is French. She was already living with Mr B when I met him. In his flat. In his bedroom. The trollop!


She has gel implants, she is seriously enhanced. And very trendy tribal tattoos.
And she has been using my nail polish, the cheek!

She has been with Mr B longer than me, he met her in Belgium and they used to go around hand in hand(lebar). She is sleek and fast. She has moved with Mr B from place to place, she is better travelled than I am.
Actually though, I have come to feel sorry for Loulou. Since those heady early days, Mr B has neglected her. She spends all her time in the garage, never feeling the wind in her tires. He has not taken her out for years. She feels flat. Every now and then I go and chat with her. We have come to a truce, for Mr B does not take me out much either these days, but thankfully he does not leave me in the garage. Normally.
Poor Loulou. I am considering signing her up with this exclusive dating agency called Ebay, to see if I can find her a new man who will take her out and about.
How do I get from bikes to perfumes?I know. Loulou is French. Lots of perfume is French, there, easy! I have been longing to post on perfumes for ages - a while ago Mrs Trefusis did a great post on perfume http://mrstrefusis.blogspot.com/. Also Life happens between Books is a serious perfume addict, she has introduced me to Perfume Court, where you can buy samples of all sorts of perfumes of all types - classic, boutique. I am seriously tempted! http://lucyfishwife.blogspot.com/
Here is my current lot. 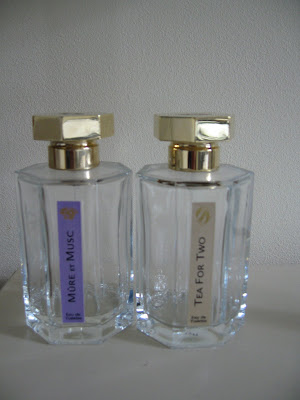 Above , L'Artisan Parfumeur Mure et Musc, and Tea for Two. Tea for Two is warm and spicy, for winter I think. Mure et Musc is quite subtle and soft, Mr B bought it for me from their shop on Marylebone High Street. The sales guy apparently took quite a shine to Mr B and gave him a complimentary hand massage. Mr B did look a bit flustered when he got home. I imagine the guy is called Serge, like the guy from Beverly Hills Cop who asks Eddie Murphy if he wants a cappucino, with a twist of lemon..

Below, on the left is Jo Malone Dark Amber and Ginger Lily. To me it smells of coconut and I think it's delicious, but the scent lingers and maybe it's a bit cloying. Should a scent linger like that?

In the middle is Darphin Cedre Precieux, woody, mellow.

What scents do you all like? Please tell, I love reading about what perfumes people wear! 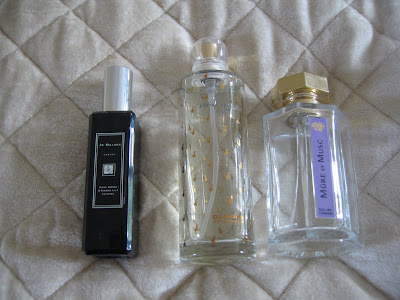 Below, Acqua di Parma. Note to self - pay attention at all times, this is Room Spray!
Additional Elf and Safety Warning: do not think you can take small boys into perfume department of large store without fitting them, you and everyone else with protective goggles, I tried and within 3 mins Boy 1 had sprayed himself in the eye with Chanel no 5. Which is a good choice if you have to do that kind of thing. Finally two "vintage" dresses - one on left from TopShop in Oxford Circus vintage bit, one on right was my mothers, I had it let out, she was slimmer than me! Question: if I wear these, will I look like an aging Sandra Dee in Grease, and if so, does that mean I have to end up wearing spray on satin trousers? Yikes. I'll leave spray on stuff to the perfume department. 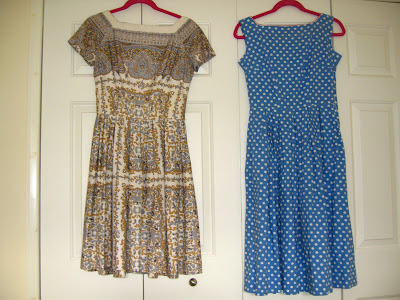