Last week school broke up for Boys 1 and 2. This means there are 8 weeks and 3 days (or 59 days) of summer holidays stretching out before us, not that I'm counting.


The end of term brought with it a round of social events. Three events, to be precise. Anymore and I would have to book into The Priory with "exhaustion" . 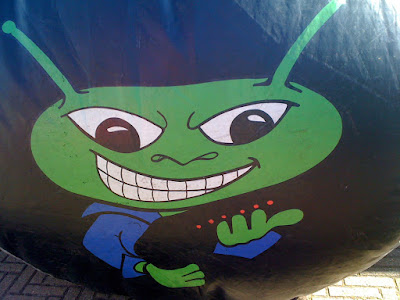 The first event was a summer party given by one of Boy 2's classmates. It was fantastic. Boy 2 kept running back to me wild-eyed exclaiming "This is the best party ever!" I agree, it was!

Above, the laser quasar tent, where Boy 1 spent most of the afternoon, despite the sauna like temperatures inside.


Below, a chap I met at the party, he didn't really do small talk so it was heavy going, to be honest. 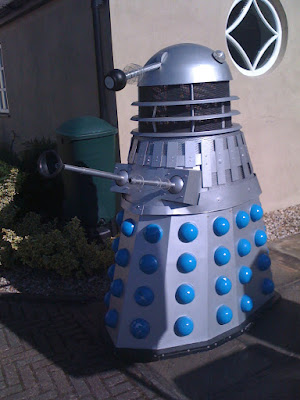 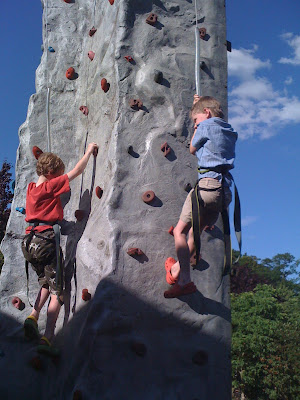 Above and below, the boys enjoying the climbing wall. 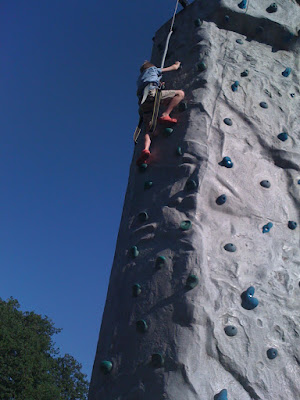 Below, some guests arrived by helicopter. 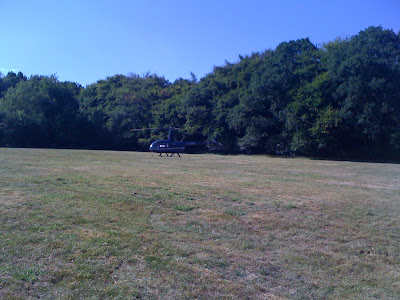 For some reason the boys found our battered Ford a less cool means of transport.
The next event was the Parents summer party that evening, held in a marquee on the school tennis courts. It was sultry hot. Mr Blighty wanted to wear shorts. I wouldn't let him. The first thing we saw upon arrival was two guys wearing shorts. "I told you you should have worn shorts" I said to Mr B helpfully. Mr B went to the bar for a drink.
Champagne was drunk and dodgy dance moves were displayed. The Headmaster and his wife started the dancing. As is traditional the single male members (that sounds wrong) of the Sports Department arrived late from the pub ever so slightly mellow. I almost didn't recognise them with their trousers on (that definitely sounds wrong). I am referring of course to their penchant for shorts wearing all year round, probably to show off their tanned legs (rumours of a sunbed in the Sports Block are rife). They adopted a 4-2-2- attacking formation and took up position in the middle of the dancefloor where they stood swaying to the music and swigging beer. I was told that last year one of them went home with a mother. "That was nice of her to give him a lift" I chirped. Mr B raised one eyebrow at me. Oh, I seeeeeee! I was then lost in fantasies about taking a sports master home myself and he would play football and cricket all day in the garden with the boys and I could go shopping.. The librarian lets the boys take books home for the whole holidays, wonder if the same applies to sports masters?
It was fantastic people watching. There were sequined dresses and high, high heels. There were maxi-dresses, little black dresses, white lace numbers. Those fathers really know how to dress up.
Mr B and I walked home under a clear sky. Mr B pointed out the stars to me. It would have been romantic if I hadn't tripped up and fallen off the pavement.
The final event was Speech Day, in the same marquee but transformed by serious seating. Boy 1 had to go early with tie and blazer on , and polished shoes. Boy 2 got to stay at home with Mr B.
It was stiflingly hot. My head ached. My eyes were heavy. It was long. Very long.
It was started off by the Chairman of the Board of Governors. He reported on various capital expenditure projects. The nuclear processing plant had been completed on schedule and the aromatherapy suite was progressing well. Plans for producing heavy water had been abandoned due to objections from local residents but talks with Spearmint Rhino were moving ahead.
Up next was the Headmaster. He read out some exam howlers - Question: name 6 animals who live in the North Pole. Answer: 3 polar bears and 3 seals.
Then a pupil gave a brilliant performance of Debussy's Golliwog's Cakewalk on the piano. I was suddenly gripped by the horrible thought that I might shout out "Pants" in a quiet bit, that piece is so stoppy starty! I resisted the temptation. I think I was delirious with the heat. Around me fathers quietly sweated. As usual, I sat behind the mother who chews gum and next to the parents I have never seen before whose son is about to leave.
Another pupil played a classical guitar piece.
Then the guest speaker, an Old Boy who went to work for the BBC gave his speech.
Finally prizes were handed out. Boy 1 did not get a prize. As usual I found it incomprehensible that they had failed to recognise the brilliance of my son at , er, well, something.
After all the excitement, it was bound to end on a low note. It did. When I collected Boy 1 he was furious. And limping. "It's all your fault" he seethed, " you told me not to wear socks yesterday." I worked out he had blisters on his feet. But how on earth did he get blisters at Speech Day? "No, at the party yesterday" he wept. Barefooted laser quasaring had produced huge blisters on each big toe. Boy 1 limped home melodramatically clutching on to my arm and wincing in pain. I recalled a ghastly film I had seen as a child starring Anna Neagle as Odette the WW2 heroine*, who had her toenails pulled out by the Gestapo and spent the rest of the film walking on her heels. Boy 1 did his Odette impersonation all the way home. It was very moving.
And as we limped home oh so slowly all I could think was "Where's a helicopter when you need one?"
* when I was a child this was deemed suitable Sunday afternoon viewing. Strange.
Posted by Blighty