Mrs B Manages To Mention Her Pants Again 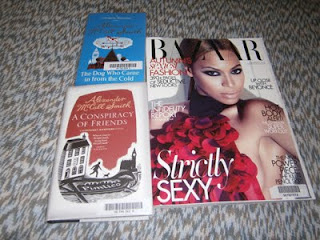 So the other day I was banging on about my holiday reading.

The book that kept me sane on the plane was Corduroy Mansions by Alexander McCall Smith.  Light and frothy, with short chapters, so you can dip in and out,  in between handing out chewy sweeties to small boys and sighing loudly as the man on the other side of you digs you in the ribs as he reorganises his trousers...

So I was lucky enough to scoop up the next two Corduroy Mansions books from the library, The Dog Who Came In From the Cold and A Conspiracy Of Friends.


However, I must confess to have been distracted from Mr McCall Smith by a very wicked man called Roger Lewis and his "Seasonal Suicide Notes". A comic diary - very rude, very funny, not for the easily offended. 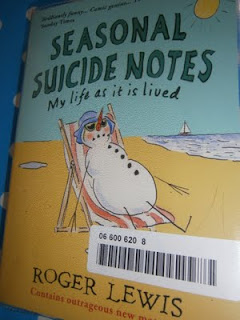 And, I also grabbed a pristine copy of September's Harpers Bazaar (when did they stop calling it Harpers and Queens?  And why?  No, don't answer that)

I adore the gloosy ads but look what they have done to Helena Bonham-Carter. 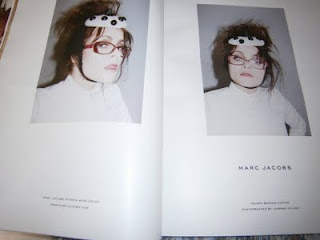 She is such a beautiful woman.  (WARNING: PATHETIC CELEB SIGHTING ANECDOTE COMING UP.   Years ago I saw her at a film opening, my friend went to say hi to her as she had been at school with her; and Helena was really, really beautiful, just enchanting; I of course stood there gawking like the village idiot.)

And in this pic she looks like the indomitable Mrs Doyle from Father Ted.  And she seems to have a teacake on her head.  But what do I know about fashion?  Apparently it's all about Old Lady Chic now.  Hooray, at last my big Mummy pants and broken veins will come into their own!