Just the other day I went up to London and met Louise, an enthusiastic and loyal commenter of Faux Fuchsia, who then kindly took an interest in my blog and now has her own blog, http://fromnorthqld.wordpress.com/
Louise has been on an amazing tour of Europe (check out her blog for details and great photos) and was just swinging by London so we got together.

You must all be wondering what Louise looks like. Here she is: 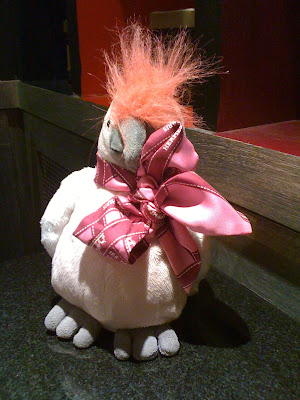 I wore black and white stripes, as usual, and popped a Manolo Blahnik-designed scarf on. Don't look too closely at my chin, I seem to have gone a bit whiskery. 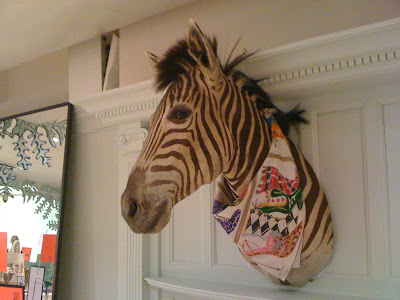 Ha ha Mrs B, you and your little jokes. Below is the real Louise, in action at Libertys of London where we met up. Louise cleverly recognised me as I was lurking by the marked down greeting cards (I was wondering whether I should buy some birth announcement cards and adapt them into thank you cards but was worried that might cause confusion:" Mr and Mrs Blighty are delighted to announce the safe delivery of their new toaster, weighing 1.2 kilos, courtesy of Auntie Norah, both toaster and white sliced loaf are doing well...")
As you can see the real Louise is indeed super cute and gorgeous, with the most beautiful hair, naturally curly. I come from a family of straight, hanging limply down hair and so does Mr B, so I find curly hair irresistible. I am now in a position to confirm, having carried out extensive research (meeting Faux Fuchsia and now Louise) that the women of Queensland are very attractive. It must be the climate. 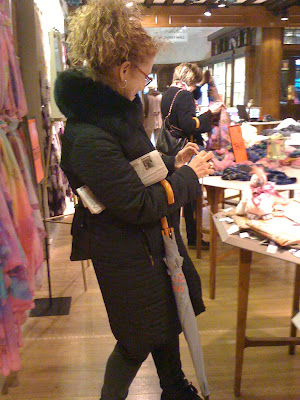 We sat in Libertys and had two coffees each and chatted for Olympic Gold for our respective countries, occasionally pausing to breathe and/or listen to what the other one was saying! It was such fun, Louise is very interesting and knowledgeable about so many things - art, archaeology, chihuahuas, boats, sailing, teaching, diving, travel in subzero temperatures to name but a few of her areas of expertise. We talked about our mutual blogcrush, Faux Fuchsia; we were like a couple of schoolgirls discussing the prettiest girl in the school - " Well, I actually saw her put her nail polish on " I found myself boasting.
Eventually we dragged ourselves out of Libertys, (still chatting so much that Louise had to go back for her umbrella) and toddled off down Regents Street. By a weird cosmic coincidence, Hamleys, probably the biggest and best known toyshop in London and the place where Boy 2 sourced the bushbaby toy that later become famous as Blighty (er, this is getting a bit overblown, no?), had window display after window display of the same sort of bushbaby toy.
These ones are Space Blights. (In fact they are called YooHoos; I was very excited to impart this info to Boy 2 when I got home; he coolly replied, "Yeah, I know, it says on the label, but I call him NubNub, it's a better name...). 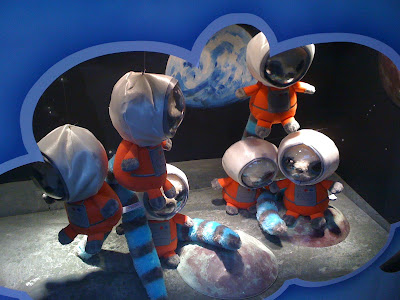 After Regent Street, we Tubed it up big time (trade mark, copyright FF 2010/11) and landed up at the Victoria and Albert Museum in South Kensington. Where we had a blast, involving lunch, getting lost in the labyrinthine layout of the museum, looking at a replica of Kylie Minogue's dressing room from her something or other Tour and also seeing Dame Edna's egg and bacon costume (as Louise so astutely pointed out because Louise has pursued High Level and Erudite Studies in Fine Art, Dame E beat Lady GaGa to the food as clothes thing by years); in short I showed Louise the best that British culture can offer the overseas visitor.
Of course, as usual in all the excitement I forgot to take pics but don't worry, Louise has got it covered.
Before we knew it, the day had whizzed by, we had a quick but thorough rummage round the superior V&A gift shop. I might have been defeated by the Libertys greetings cards but I succeeded in picking up some discounted Christmas decorations, having vowed that one day my tree would be like FF's: never undecorated. 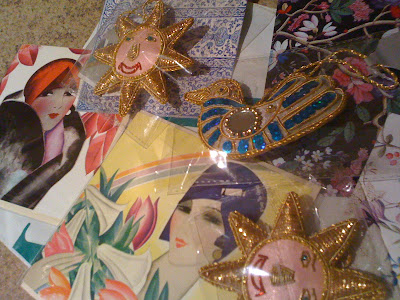 And then it was time to say goodbye, and we had only covered 5% of the issues we needed to work through, but never mind, because we had a smashing time. Louise, thank you for a lovely day and come back soon (but don't bring any snaks, promise!)