The Wedding and Beyond

Well, I enjoyed the Wedding. Lots of bling, glamour and good looks, and that was just old Prince Harry.


But I must admit Boys 1 and 2 weren't quite so captivated.  There wasn't much in it for them - no Wii allowed as TV commandeered for Wedding viewing; no sign of any aliens, Ninja turtles, Pokemon, Puffles or Dr Who type monsters, though I did hope the assortment of weird hats might prove an adequate substitute.

And like:
Mrs Blighty: "Good to see old Tara's snozzle is holding up ok."
Boy 2: "Why? What's wrong with her nose? What did she do to it?"
Mrs Blighty: "She did too much....
Mr Blighty: "Look at the policemen with the machine guns!"

To keep the boys amused we also played a game called Spot the Coachman.  At pre-Boy 1 ante-natal classes I met a girl whose husband was a Royal coachman.They lived in the Royal Mews next to Buckingham Palace.  Baby Boy 1  used to go on "playdates"* there with their new baby. (* mothers drink tea and chat while babies lie dribbling and blowing bubbles).  After that we lost touch, what with Boy 1 being a boy with the boy toddler interests of bashing things, smashing stuff and knocking anything else over, and their baby being a girl who therefore quietly and with the minimum of fuss taught herself to read Proust (in French) and  took up needlepoint, harp, watercolours, quantum mechanics, Ancient Greek and chess..

We concentrated hard on Spot the Coachman, he would have been one of those riding on one of the carriage horses...we never saw him, and I must say, the BBC's coverage of the coaches and horses was really rather poor, the camera kept switching back to that girl in the white lace..

We had house guests, Lovely B's daughter and her husband who are a very cool couple and Boys 1 and 2 adore them and totally want to ditch their boring parents and go live with them instead. So after we had watched the Wedding we dragged Boys 1 and 2 out to a street party in the old part of town.

It was all very jolly. 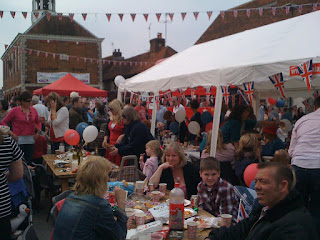 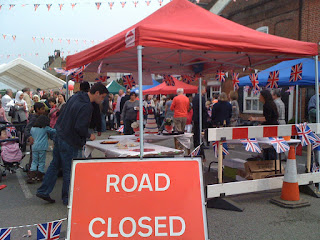 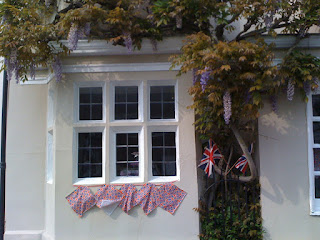 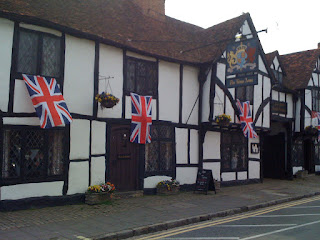 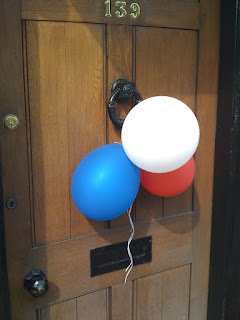 After a bit of mooching about, a chat with some school friends and a refreshing beverage, we returned home and started the important business of discussing the Wedding in detail.. Boys 1 and 2 slunk off, relieved to be released from Wedding duty.
Posted by Blighty