Dahlings, I really feel I have been neglecting my role as deranged marsupial style icon to the masses.  One cannot just leave it to Daphne Guinness.  But recently I have been sooo occupied with riot control, kettling and star charts that I have scarcely had time for matters sartorial.  Do forgive me.

Things have not been going that well on the clothes front. Remember the terrible skirt I bought on-line (now safely returned to the Big Warehouse in the Sky)? Well I have experienced another Nasty On-line Buy - ("Nob") - yes, I have had to invent a whole new word to cover this recurring nightmare. I present my latest Nob.

Last week I went for a little light shopping with two Mummy friends. We hit up the local Happy Valley Shopping Centre.

Of course, union rules provide that no mother of male children can pursue retail activities without buying some sort of sporting equipment for said male child.   So we found ourselves in the Sports Shop discussing the merits of size 4 bats versus size 3, octopus grips, knocking in (isn't this what got us into the union in the first place?) and oiling your bat.


I wondered whether I should get one of these hats - who knew Philip Treacy sold off the peg numbers like these? 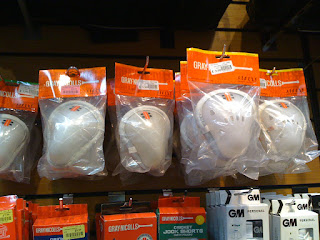 Things hotted up when we went into House of Fraser.  Look at these shoes!  When did shoes get so high? And so fetishistic?

The girlfriends and I had a laugh trying on lots of clothes and coming out of the changing rooms in fits of giggles - it was like being a teenager again...  I did not buy anything except for the spotty silk scarf I am modelling in the first pic in this post.

But you can't keep a shoptart down - this week I popped up to London and had a toddle round Oxford Street, ending up in Selfridges.  I spotted this chap by the Creme de la Mer counter, probably about to spend the fee from his latest movie on a pot of skin serum.
He looked at me with ill-concealed lust  failed to register my existence and so I had a good peruse of the OPI stand and bought this orange polish from their Summer 2011 Texas range.
When I had finished annoying the OPI ladies by putting the polishes back in the wrong place (nail polish, bringing people together) and walked back past the Creme de la Mer counter Mr O was still there - bless, either he was lurking, hoping to talk to me or there was some terrible shortage of premium unguents for Hollywood A listers.. He was very tall, tanned and striking, in a dark suit.  But I just know he wouldn't have Mr Blighty's drafting skills...﻿
I faced the ever hectic MAC counter at Selfridges and bought a lipstick called Vegas Vamp.
I like MAC - they don't take themselves too seriously.  I picked this lipgloss up a while ago - it's got a pic of Cruella de Ville on it, a true style icon indeed, though not dog friendly.. 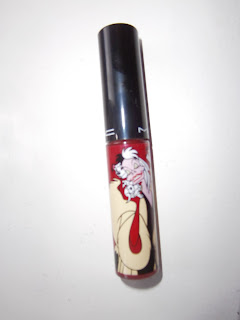 A few other things winked at me and asked me to take them home:

In fact it was only Mr Owen who did not to wink and beg to come home with me.

He would have hated my moisturiser.
Posted by Blighty