Dahlings! A quick post while I have the chance - Boy 1 is at yet another disco and Boy 2 has (illegally) reconnected the Wii and I am pretending I haven't noticed...

This time the disco is at the girls' school - St Britneys.  When Boy 1 learnt the venue, he nodded sagely and muttered, "Enemy territory."  Should I have asked Mr Cameron for a spare Apache, for air cover?  What if the mission goes wrong and Boy 1 goes native, and is found years later on the netball court, wild eyed and covered in hairclips, bangles and glitter?

Highlights of this week have been Boy 1's new cricket bat and cricket wheelie bag, and Boy 2's wounded foot - caused by an attempt to scale his wardrobe one night after lights out, for reasons known only to Boy 2 and assisted only by a rickety chair. Result - terrific thump, wailing, school attendance wearing one school shoe and one bright red Croc and mad hoppy-skippy walking (to emphasise the incredible pain and amazing braveness of the Afflicted One).

The combination of the new cricket bag and the foot incident really made me wonder about the Blighty gene pool. Picture the scene: I decant Cricket Boy and Hoppalong Cassidy from the car after school; Hoppalong gets to the door first but wobbles at the threshold; Cricket Boy, fresh from a cricket match where his team triumphed over the Weeny Tweenies under 5s, pushes past in a manly, sportsmanlike way, his new cricket bag slung over his shoulder; unfortunately he has not worked out that the bag is wider than the doorway.....so he wedges himself in the door and practically knocks himself out, and narrowly avoids bringing down old Hoppalong who is tottering behind him...
I didn't help by dissolving into mad laughter but really...what a pair! !
Is there any hope for those two I wonder?**  Could they perhaps play Thompson and Thomson in a Tintin adaptation?


My handydandy calendar which has funny quotes for each day (and quite frankly is getting on my nerves with its relentless jollity) featured this the other day: 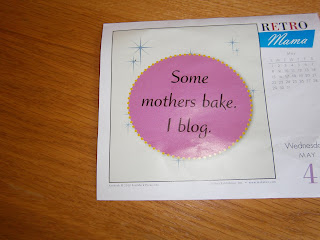 I like a challenge so I whipped up a cake -  yes, Mrs Blighty, Having It All.  But I had a chocolate fudge icing malfunction - it was so runny, not only did it run off the cake but the top of the cake started to slide off the bottom, in sinister slo-mo.  You never see Nigella's top sliding off her bottom, as it were. (Although no doubt some tapes will surface at some point). 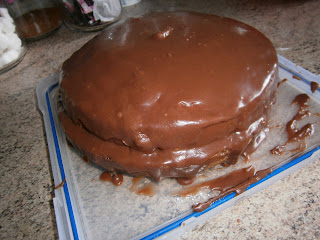 And of course,  the main news is that, having managed a few days at school, the Boys are now on holidays AGAIN.  You know how fashionistas do that "Cost per Wear" calculation - if you buy a dress which costs £800 and wear it 10 times it only costs you...er....(but why not buy a dress that costs £10 and wear that 10 times and it will work out even cheaper???)...well, I hate to think of the Cost per Wear on a Daphne4Boy$ uniform...but don't worry, I am doing my best to bring the cost down by forcing Boy 1 to wear a blazer whose sleeves now stop just below his elbows... I tried to do the same with the PE shorts until the music teacher took me to one side and explained that there wasn't a part for a falsetto in the school choir...

* I have to thank Debs for this title; Debs is a loyal and witty commenter, who made me laugh by commenting recently that everything seemed "normal as usual" in the Blighty household.
** Should Boy 1 take up the double bass?  I have to come clean and fess up to similar door width/turning in corridor/  misshaps with a cello in my yoof..
Posted by Blighty