Dahlings, I do apologise for the lack of posting.  I have been prevented from Telling All due to a Super Injunction  - Mr B****** obtained a court order stopping me from publishing details of our relationship and family life, including our d*****  p****** .    But the gagging order has now been lifted, following a further hearing at the High Court where I represented myself and gave an exhaustive 4 hour presentation, at the end of which the judge woke up and ruled no one was the slightest bit interested and he now wanted lunch.

So on I go, doing freedom of speech and whatnot.

Now we all know small boys move in mysterious ways, and Boy 2 is no exception.  If he decides something is called something, that is what it is called, despite all evidence to the contrary and despite the entire world calling it something else.

For example, rugby, that game played in winter, the object of which is for boys to get covered in mud and mothers to get hypothermia. Boy 2 insists it is called Rubby.*

And now Boy 2 has joined Daphnes4Boy$ Chess Club.  He maintains it is called Chest. 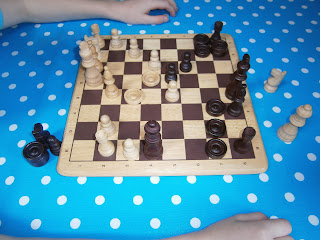 He is very keen on Chest these days.  I can't actually play, but Boy 2 has been teaching me.

He expertly took me through each piece and how they move:
"And this Mummy, is a prawn."
"Er, sweetie, they are pawns, not prawns. Prawns are a kind of seafood, like shrimps."
"Yes, they are small like shrimps, they are shrimpy, that's why they are called prawns."
"Darling, they really are pawns."
"I call them prawns".  End of discussion.

Oh well, I am just thankful that Chest and Rubby don't get combined, if you see what I mean.

In other news, Boy 2 has to do the dreaded English Speaking Board exam.  He has to recite a poem learnt by heart, read a passage chosen from a book and give a talk on an object or game

I have already suffered through the English Speaking exam with Boy 1.  Fairly traumatic due to Boy 1's refusal to learn his poem properly, and the deliberate substitution of the wrong words (mainly butt and willy). But we managed. Just.

So, no worries, I will just recycle Boy 1's talk again for Boy 2.

Now what was it?  OOh, I did visual aids and everything, I remember now!

Ah. The talk.  It was on Chest.
And the different pieces.
Including prawns.

Maybe time for a rethink.


* These days I am watching a lot of cricket matches, I feel just like Liz Hurley watching old Shane Warne, she wears slinky jeggings and a little corsety top, I wear 3 jumpers and Boy 1's cagoule; at the end of the match Liz puckers up and gives old Warnie a kiss; I chase Boy 1 round the field trying to get him to give his nose a good blow...
Posted by Blighty