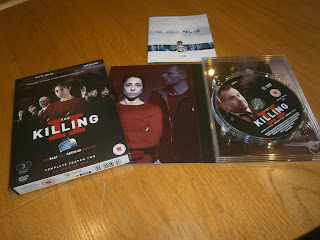 Dahlings, how are we today? Really?  How on earth did he get it stuck in there?  Awful!*

So Mr B and I have just finished watching The Killing 2.  Always a bit behind the times at Blighty HQ.

Gosh, it was BRILLIANT!  I had heard that it wasn't as good as the original Killing, but I loved it, in fact I think it was even better.

It ticked all the boxes for Nordic Noir:

*don't be disgusting you lot, I was actually thinking of a recent newspaper report about kids getting their tongues stuck inside those metal drinking bottles, poor things had to have an operation to get it out.  After I had read that, I had the most dreadful urge to try sticking my own tongue in the boys' metal bottles.  What can I say, I was that kid at school, who always had to do the ONE  thing we were told not to do...
Posted by Blighty