We have been having a bit of snow here recently.  The Daily Mail on-line (top internet resource of celebs and Grandma Whacker) keeps quoting a town in Buckinghamshire near here as the coldest place in Britain - minus 18 degrees last night, says the Daily Mail excitedly, even colder than Moscow. No other news sites award this town the lowest temp, so I guess someone at the Mail has an auntie living out there with a thermometer in her freezer garden....

Mr Blighty is a very happy man.  He is overcome with a powerful sense of vindication.  Back in August last year he talked through at length the pros and cons of having winter tyres fitted to the car.  This was following Drivegate, when for 3 years in a row it snowed heavily and we couldn't get our car up the drive...and we were down to our last 22 tins of soup and 52 packets of biscuits so things were getting pretty desperate. I did suggest we ate Boy 2 but he wasn't keen, the youth of today have no sense of self-sacrifice or duty.

In August I must admit I did not engage fully in the discussion as it was hot and I was trying to remember whether I had put suntan lotion on  Boys 1 and 2 before their cricket matches..

But Mr B forged onwards, got the tyres fitted in October and then sat back and had the rip taken out of him as we experienced the mildest of winters. But now snow is here, and we are able effortlessly to drive out onto the road without shovelling snow...I was enjoying a smugfest just the other day as I drove the boys to school, overtaking my neighbour who was trudging on foot throught the snow, Russian peasant style...(I am not uncaring though, I did stop and tell her how good my tyres were and how warm it was in the car...).   Smugfest of course brought to abrupt end by arrival back at home after school drop to discover Boy 1's games bag still sitting on the back seat...

Mr B has succeeded where even Napoleon failed - For wont of a horseshoe - fascinating piece about how Napoleon's horses in the Russian campaign did not have winter horseshoes, I am always interested in descriptions of disastrous military campaigns, particularly since many similar debacles during my years attempting to arrive at and then withdraw from toddler singsong playgroups with my own ill-disciplined troops and logistical shortcomings ("If only the Blighty Army had had strait jackets instead of flimsy infant car seats, the Holland Park Mother and Toddler Campaign would have ended very differently..")


So we have snow.  Which to me means happy games in the snow, and some gentle sledging.


Boys 1 and 2 had different ideas.  They managed to find a sheer drop to go down. 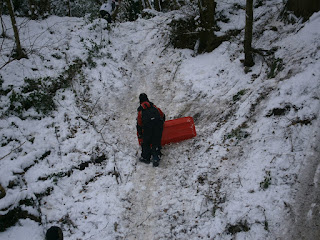 Tremendous fun: early on in descent, boy and sledge would part company, boy would shoot down slope ahead of sledge, sledge would then join boy at bottom, clonking him on head...excellent..
Soon, possibly because their heads were getting sore, the boys dispensed with the sledges and just hurled themselves down the slopes..


And imagine my delight when I found there was barbed wire at the top which they were crawling under to get to the edge of the precipice... 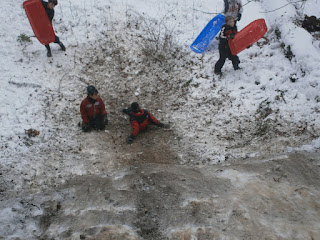 Anyone know if you can fit winter tyres to kids?  Or straitjackets to mothers?*


*Think we know the answer to that last question...doctor, doctor, can I come out now??
Posted by Blighty

Email ThisBlogThis!Share to TwitterShare to FacebookShare to Pinterest
Labels: Boys 1 and 2, domestic issues, Grandma Whacker and other wildlife, weather