Here events have taken a strange turn and Boy 1 seems to have entered the teenage years, even though he is only going to be 11 when his birthday comes next week..

There were a few warnings signs - increased interest in personal hygiene for a couple of weeks which meant showers in the morning/pool of water on bathroom floor and a desire for body spray products.  I even caught Boy "I don't need a bath my knees are only a bit muddy" 2 surreptitiously spraying on some Lynx Africa under his pjs the other day.  (A friend who used to be in the Navy told me that the application of deodorant onto unwashed body is know as a "submariner's dobby", that's the kind of info my brain retains).

I could launch into a rant about childhood ending too early and the evils of advertising and consumerism and children being made to feel they need deodorising when they are not even whiffy...but the blog couldn't cope with an outbreak of earnestness...and  thankfully both boys aren't really that bothered, with body spray coming a long way down a list of activities where Warhammer, computer games, football, totally unfunny jokes about cheese and whacking each other on the head with Nerf guns take priority.

I did, though, find myself in Hollister in the Westfield Shopping Centre, London yesterday with Boy 1.  And what an unsettling experience it was!

We were on a mission to buy Boy 1 a T-shirt for his birthday. We located the shop, which was all decked up on the outside to look like a house with white shutters and tiles. Inside we found a warren of tiny little rooms overstuffed with kit.  And Boy 1, as if a switch had been flicked, got very grumpy and teenage with me.  He was so obviously finding me a total embarrassment.  Can't think why, I only said things like:

"Ooh, it's sooo dark in here, I can't see what colour that is, or the size, can you see the size?"
"Oooh, it's so cluttered up, did you see I almost fell over that rail? It's a deathtrap!"

He almost died of shame when I pushed the stockroom door ajar to see what colour the T-shirt was I was holding..
And he got really narked when I said for the 50th time, "If you're too hot, poppet, you can take your hoodie off."

The shop was full of teenage girls and boys, both customers and sales assistants. The average age was about 16 ( and that's only because me and a couple of other wrinklies pushed the average up by 10 years).Gosh, I felt so old baggy and witchy, faced with a very pretty sales girl wearing a tiny little broderie anglaise top - why are teenagers so attractive these days?  What happened to acne and gawkiness and greasy hair? (oh, that was just me - thanks Grandma Whacker).  I saw another mother exclaiming about the bad lighting, and a very cross father shouting, "Right, that's enough, I'm leaving!"  It's the sort of shop that makes parents very grouchy.

But despite or possibly because of the parental disapproval, the stuff was flying off the shelves and I guess teenagers would be too embarrassed to return a T shirt which they thought was grey and then in the daylight turned out to be fluorescent orange...

It wasn't all bad.  We scored a couple of cool T shirts.
And I got to take this chap home. 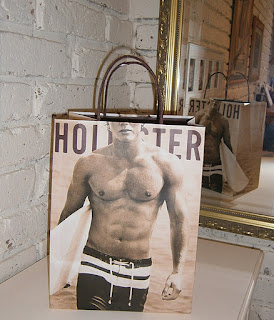 To be honest he is not really my type, I hate a man whose chest is better developed that my own.

And as Boy 2 has just pointed out, he looks a lot like Grendel from Boy 2's Beowulf reading book. 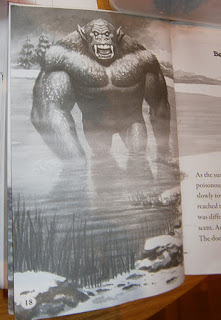 Little know fact: Grendel only angry because someone nicked his surfboard and his agent never got him any really good modelling jobs.﻿
Posted by Blighty