2012 and the Entente Cordiale

2012 is already off to a really good start - Grandma Whacker has decided to take Boy 1's French language skills in hand.   For Christmas she got him this. 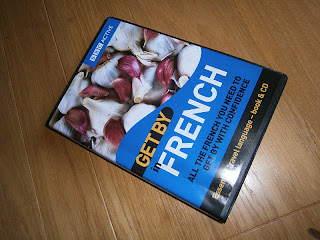 Bless him he was so thrilled with it on Christmas Day, he was speechless, just threw it over his shoulder and carried on unwrapping Warhammer and Lynx body spray.

What prompted this grandmaternal purchase was my surprise when I found out that Boy 1 had been learning French at school for the past 2 years...and also that there were lists of vocab he should have been learning each week.  I can honestly say there was no sign whatsoever of any Francophone goings on in Boy 1's busy schedule of activities.  He also steadfastly denies any knowledge of French, merely repeating his chosen mantra of  "The French are a load of cheese eating surrender monkeys" which he has picked up from Jeremy Clarkson's Top Gear . I had a little chat with Boy 1's French teacher (now I know she exists) about this and we both agreed that we could quite happily throttle Mr Clarkso. In the circs I feel that Boy 1's score of 3 and a half out of 11 for his French test is  - well, not as bad as it could have been.

So this morning at breakfast Grandma W decided it was a good time to debut the language CD.  She would brook no discussion.  She was on a mission.

I did try to point out that perhaps the boys were not in the right frame of mind as they had just been watching snippets of "Come Fly With Me" on YouTube.

But to no avail - on goes the CD.  Off sloped Boy 1 to the other room.  Leaving Boy 2 who at first appeared to be making a fair stab at repeating the phrases on the CD - "Bonjour, comment allez-vous?, je suis en vacances, je suis de Londres", etc

It was just a minute later than both Grandma and I realised he was now happily repeating the phrases- IN ENGLISH.   The nice lady on the tape was instructing cheerfully, "Now it's your turn, say you are on holiday"  - and Boy 2 piped up : " I am on holiday"...now urged the lady, "Say you come from London" - "I come from London" chirrups Boy 2.