Er hello, it's Boy 1 here, I am doing a post for Mummy as she is very fried tried tired after Christmas, she is asleep on the sofar with lots of rappers wrappers from After Eight choc mints and bits of tinsel in her hair.

Every few minutes she half wakes up and shouts "Does anyone want a mince pie?" Daddy says she has Post Christmas Hostess syndrome..

Most important is I got some Warhammer for Christmas.  It looks like this. 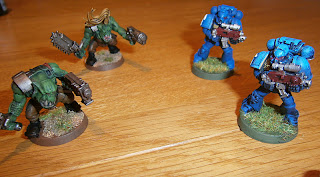 You buy the figures.

Then you spend ages painting them with special paint with cool names like Goblin Green, Devlan Mud and Skull White and oooh, Bleached Bone. Nice.

And then you play complicated battles with them, there is a long rule book and you have rulers and stuff to measure the distance that your weapons can fire. 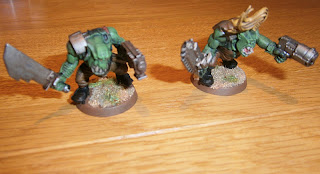 Mummy got quite interested in my Ork figures, I showed her all the paints they needed and explained at length their weapons and armour and boots and stuff.. 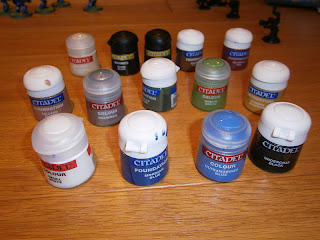 When she saw all the paints, Mummy stomped off muttering that she could not believe that an Ork has more nail polish and paints and accessories than she has..
Mummy is back on the sofa now...

"No Mummy, I don't want a mince pie.."
Posted by Blighty