Dahlings, last week was both lovely and exciting, as Linda in Chile was in London town and I got to meet her in Real Life.  Linda is a loyal and eloquent commenter on Faux Fuchsia's blog, and when I started this blogging malarkey, Linda kindly followed my blog too.

Mr Blighty is also a big fan of Linda, as he approves of her erudite, balanced and beautifully written comments:
guess  discern?

So I hotfooted up to town, met Linda at her hotel on the Strand and we toddled off to the cafe called The Crypt under the Church of St Martins in the Fields.   We had so much to talk about - all the big issues like nail polish, shoe buying, husbands v credit cards and how the Chileans speak Spanish without the lisping - the latter was a big shock to me, where's the fun if people around you don't need to pop on raincoats?  I was brought up on Nigel Molesworth who opines that "..you have to lisp when you speke Spanish which make it all very difficult.."

Linda and I then gambolled around the National Portrait Gallery, among the Tudors ( "You can say what you like about Henry VIII but in his younger days he had great legs") and then looked at Caroline of Brunswick and some Georges, which shamingly Linda knew much more about that I (I spent my entire secondary school career struggling with  "The Dissolution of the Monasteries: Was Henry just jealous that Cardinal Wolsey looked fab in red?")


We also saw this lady. 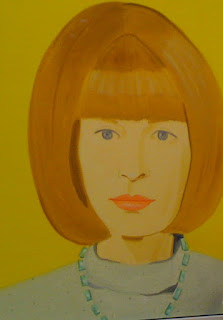 But the fun did not stop there!  Mr B and I had the pleasure of going out to dinner with Linda later in the week.  We went to Odin's, which I visited years ago and loved because they have lots of lovely pictures on the walls (though none of Henry VIII).  A good evening was had, (I particularly liked the figs in wine pudding) and we saluted Marylebone High Street and the Malene Birger shop (which is just opposite Odin's) in homage to Faux Fuchsia .


Linda, it was so lovely to meet you.  And don't hold back with the lisping, you know you want to really!

*From How To Be Topp by Geoffrey Willans and Ronald Searle, quite possibly one of the most important books ever written.
Posted by Blighty