What's So Special about Barcelona?

So what's Barcelona got that we don't have at Casa Blighty ?
Well it has the Bus Turistic.  An easy way to get round the city. And great fun, what with me sitting on the top deck and flinching every time the audio guide mentioned Gaudi -  the cue for Boys 1 and 2 to jump up from their seats and shout "Gaudiiiiiiiiiiii!" at 7000 decibels.  (Pretty soon I developed a nervous tic below my right eye and roared "Sit Down!" at frequent intervals...a bit embarrassing when you're not even on the bus anymore) . And just when I was getting all interested and cultural as the audio guide burbled on about Miro or the Sagrada Familia or Park Guell, Boy 2's infernal twitchy fingers would switch me to Japanese....which was nice.  In the end no member of the Blighty family wanted to sit next to Mr Twiddle Fingers on the bus, such was his dedication to channel jacking.  However, reports of small boys being catapulted off buses are vastly exaggerated.

But when we visited the Gaudiiiii  designed La Pedrera, I really could not see much difference between it and our own dear Blighty HQ or should that be Blightiiiiiiiiii?

But the maid's rooms were very similar.
The childrens' bedrooms at La Pedrera/La Blightera were virtually indistinguishable:
But some things were a bit different.  La Pedrera boasted the very latest iPhone. 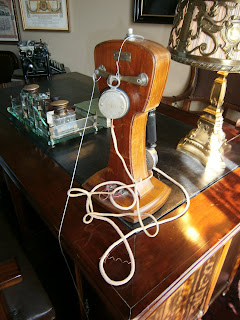 This looks like it should be Faux Fuchsia's room 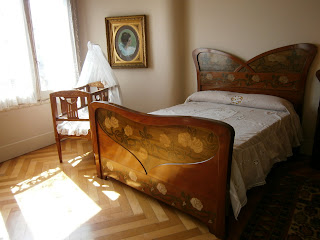 I have to admit  Park Guell (another Gaudi design) was a bit different than your average park - this looked sort of North African: 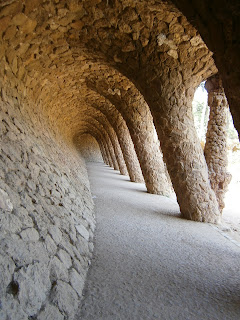 And to us English seeing oranges growing on a tree, rather than in nets at the supermarket,  is exotic and exciting. 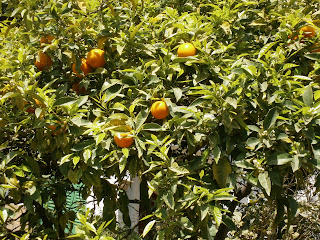 Barcelona has the Fundacio Miro - entrance below.  Reminds me, Boys 1 and 2 need baths. 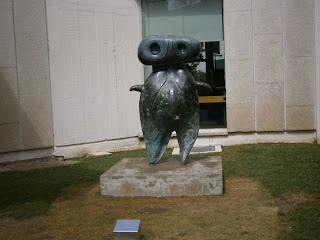 I got all earnest middle class mummy in the Miro place - saying to Boy 1: "Darling, you know that picture you used to have in your room at home?  That was Miro."*
It amused me No End when I saw that Miro had a friend called Prats.  Prats had a hat shop in Barcelona.  Prats Hats?
Pictures below are of another Gaudiiiii building, the Casa Batllo.  Ok, I admit the tiling is a lot fancier than chez nous. 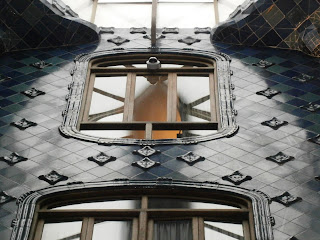 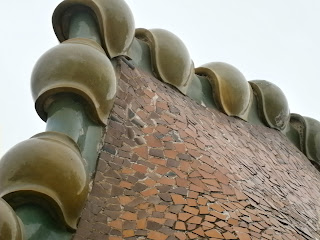 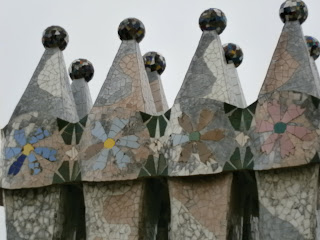 This is Placa de Sant Felipe in the Barri Gotic and is a sad reminder of the Spanish Civil War.  The outside of the church is pitted by bullets and shrapnel from bombs: during the Civil War people were executed by Franco's men against this wall, and  a number of refugee children died when the church was bombed. 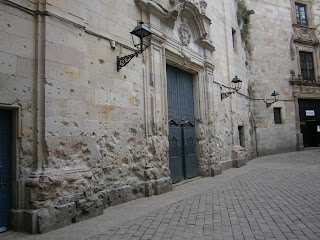 And oddly, Gaudi was on his way to this church when he was was knocked down by a tram, and later died.
I can't end on a sad, reflective note, that would not do at all.  So here's a picture of Las Ramblas with stalls selling palms ready for Palm Sunday.  And Mr Twiddly Digits himself, planning his next move.
*Of course when we got home I discovered said picture was in fact Klee.  Guess I don't know my art from my elbow.﻿
Posted by Blighty