WOT I DONE IN ME HOLIDAYS AND OTHER NEWS

Dahlings, I can't believe how long it is since last I blogged. Disgraceful! I really would not want this blog to fall into desuetude.* Although (much to Mr Blighty's amusement) during my breaks in posting I always gain more followers.  Paradoxically*, frequent posting causes me to lose followers - what me, offend people? Shocking!

Well life seems to have been coming at me like a hyperactive toddler covered in melted chocolate when you are wearing a cream suit, and there has been the small event of Boys 1and 2's half term hols (now safely over, though Boy 1 did manage to wangle a day off "ill" last week - "ill" as in, I feel a bit tired and don't really much fancy it today). AND THEY HAVE ONLY 4 WEEKS LEFT NOW OF SCHOOL BEFORE THE LONG SUMMER HOLS NOT THAT I AM PANICKING OR ANYTHING WHERE IS MY PASSPORT STUFF IT I WILL LEAVE ALL MY CLOTHES BEHIND YES I WANT TO CLOSE THE ACCOUNTS AND TAKE THE WHOLE BALANCE IN CASH TAXIIIIIIIII! WHEN IS THE NEXT FLIGHT LEAVING? WHERE? NEVER HEARD OF IT GIVE ME A SINGLE TICKET CAN I PAY CASH? ETC ETC!..

So in this post I am just going randomly to paste pics from the last couple of weeks and make it up as I go along (so actually no change whatsoever to my usual modus operandi*).. 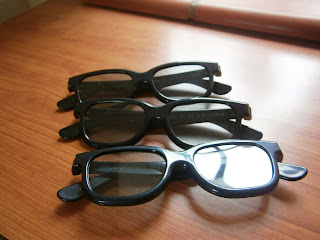 Above, 3D glasses -Mr B has just taken the boys off to watch Kung Fu Panda 2.  During the hols I took them to Pirates of the Caribbean 34  and would like to point out that the actual running time of that film is in fact 2 and a half days, never mind what they claim on the cinema website.  I can also confirm that the correct mathematical formula for popcorn consumption by Boy 2 is : bodyweight x 2 + total arm  reach x fist capacity - trouser coverage - time popcorn removed by Mummy who is no fun at all.  All rigorously scientifically tested. Another interesting statistic: number of times Mummy said loudly in a quiet bit "Does anyone need a wee?" = 7 ( Oh and I would just like to say well done to the man at the back who very obediently did as he was told..)


Cinema today is a good idea as it has been raining nonstop and cricket has been cancelled.  Mind you, cricket is not what is was, thanks to a teenage pyromaniac who did this to the cricket pavilion just a  couple of months ago. 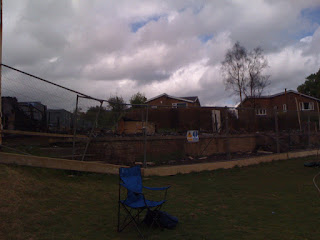 Grandma Whacker came to stay to help me with the boys during half-term.  She brought these lovely roses from her garden. 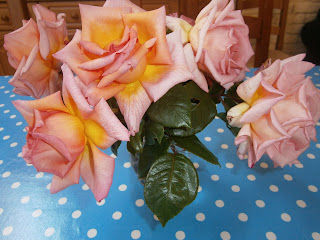 With my mother around I regressed to my teenage self, wore ripped jeans and painted my nails an alarming colour.  Grandma pronounced that "You bloggy girls have very frightening nails!" 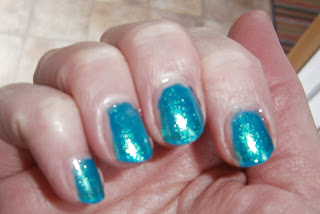 I tried to be a bit Faux Fuchsia so wore this purple rock arrangement (copyright FF 20110).

The colour is OPI Summer 2010 .   I am thinking that soon I will get my alter ego Sindy Lemon-Grass-Snoddy (beautician and research chemist) to do a guest post on nail polish. 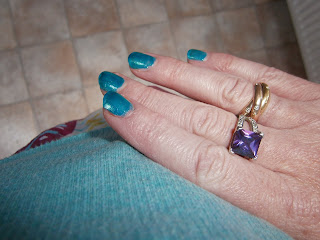 I played chess with Boy 2 (aged 8).  He beat me. Easily.  I can't actually play chess and so Boy 2 has been teaching me, but he only tells me certain things, bit by bit.  The book is for me, not him. I'll show him! 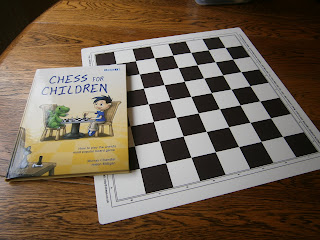 This thing below is Mr Snoodles.  Boy 2 has been going on about buying him for ages, he is a Moshi Monster character. Apparently.  I must admit to being somewhat underwhelmed when I finally came face to face with Mr Snoodles.  He is basically a yellow pig with green ears.  Boy 2 of course adores him and will do for at least the next 10 hours, before abandoning him on his bedroom floor forever. Poor Mr Snoodles. 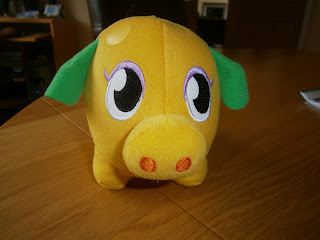 This is, according to Mr Blighty, the most expensive property in the UK - One Hyde Park. The penthouse flat sold for about £140 million last year. Gulp!  We went past it on the way to a football birthday party in Hyde Park a few weeks ago. 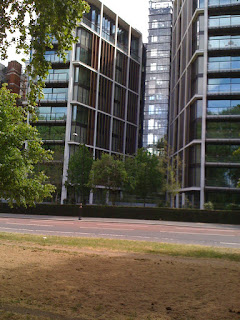 They must get a nice view of the park. 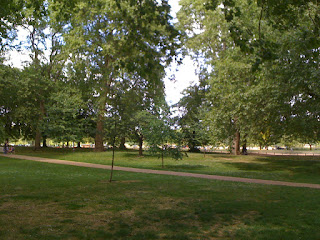 And at the bottom of the building is a handy convenience store, for those last minute essentials. 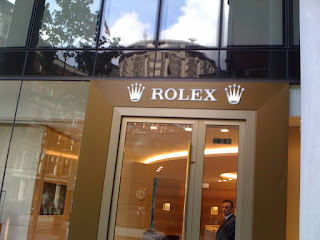 Once the boys went back to school Grandma and I hit up John Lewis, that purveyor of all household wares to middle England.  Look at the price of this baby!  Does it go buy the ingredients for you, load them in the car and unpack them when it gets home?  For this price it's the least it can do. 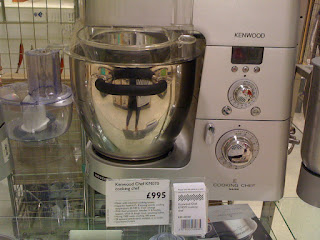 I liked the colour of this Kitchen Aid.  But Grandma reminded me that I did not really cook plus there is the evidence of prior gadget abuse in the form of my breadmaker (last used in 2007), slow cooker, rice cooker... 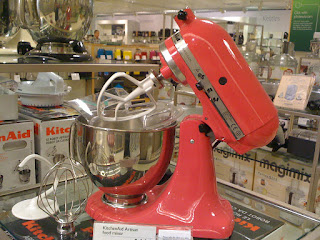 Loved the cheery colours of these gadgets.  I could wear matching nail polish (not now Sindy). 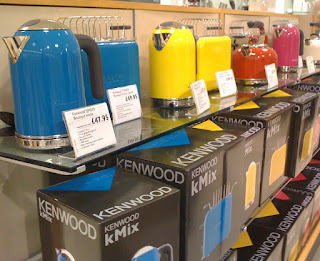 Grandma and I endured the Horror of Sports Day - from 9am to 5pm on a windswept sports field bordering the motorway, total time spent by Boy 1 and Boy 2 doing an event 4 mins.  I particularly enjoyed the hail stones at about 2.30pm, though the drizzle at 11am was good too.  And readers of Faux Fuchsia will know that just the other day she locked her keys in the car and had to get the emergency rescue man out.  Well, ever keen to emulate Faux I locked Grandma in the car at the start of Sports Day. For 20 minutes.  By accident. Honest.  Result: one Very Cross Grandma;  the RSPCA are never going to let me have a dog; and Grandma will never get in the car again without the keys and an emergency flare.

Here is Boy 2 taking it all very seriously, keeping his pompoms dry. At least I think it is Boy 2 - as usual I was cheering on a boy with the same red trainers - who turned out not to be Boy 2.....And I can never remember the house names and colours - "no Mummy, green is Ringworm, Yellow is Impetigo, Red is ChickenPox, Blue is Verruca"  (Daphnes4Boy$ Sports Day, sponsored by Clapxx  Pharmaceuticals). 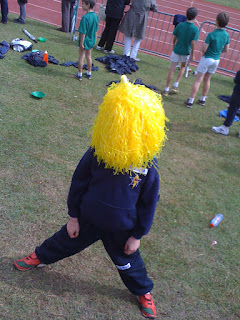 Yesterday we went to a lovely party, and the boys did lots of this, having investigated the chocolate fountain and the ice cream van first. 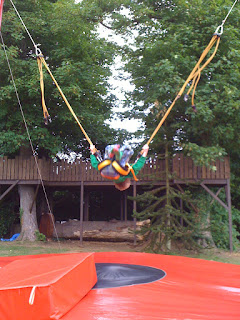 Finally I found these in the cupboards, sweet little baby plates which a Swedish friend gave us when Boy 1 was tiny.  I am wondering whether a certain little Australian baby might like these.  I never really used them as I favoured bowls that could be stuck down by suction pads onto the high chair. 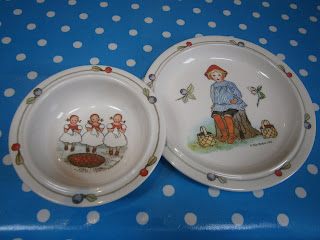 Even so, this happened far too often...﻿ 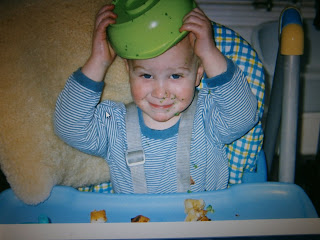 *  I would like to dedicate these items of vocabulary to Louise InTownsville and Linda in Chile.
Posted by Blighty