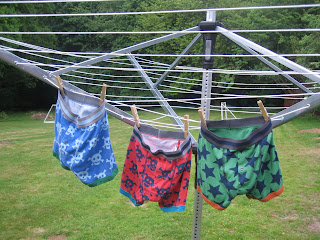 I had hoped to start my blog with a description of my life as an international supermodel, wife, mother of two adorable boys, living in a beautiful country house with organic free range peacocks roaming in the park and -er- stuff. I would have liked to tell you about my charity aimed at bringing aromatherapy to stressed out bankers around the world. And how I am an inveterate fantasist. But none of the above is remotely true, except the last bit. Instead I am starting with a photo of small boy pants. Why? Because for me, being a mother sometimes feels just a little bit pants. I had a day like that yesterday. It went something like this:

Before school - Boy 1 and 2 playing rowdy, good-natured (and to me totally ANNOYING) game of hurling at least 15 soft toys to each other in the kitchen; followed by the standard "male of the species" non-hearing of shouts to come and eat breakfast; then long negotiation of whether Boy 1 can take my ski sunglasses to school (he gets full custody but I get access once a year for ski trips), removal of toothpaste and most food substances from boys while chasing them around house and/or sitting on them. 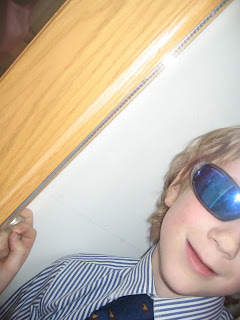 So far, so good. Then things go sour when Boy 1 dons blazer and rucksack, and heads decisively for the door. I laugh as I notice he has forgotten to put his shoes on. A minor detail but an important one.

Boy 1 FURIOUS. Terrible wounded male pride. Some back peddling by me, general smoothing, I wish Boy 1 luck with his cricket match that afternoon and I remind Boy 2 to be nice and not shout at the other boys (to which he shouts "I DON'T SHOUT AND THEY'RE ALL IDIOTS!").
Drop off done, back home, exhausted, for a soothing cup of tea.

Fast forward to 3.30pm. I pick up Boy 2. His first and only words: "Can I play on the computer?" No, I say, we have talked about this, no computer on weekdays. Boy 2 goes PUCE. Massive eruption of displeasure "You never let me play 'puter, never, it's not fair, can I play, pleeeeeeeeeeez, waaaaaaaaah" Other parents watch with the quiet satisfaction that at least this time it's not their offspring who is kicking off. Boy 2 keeps up his vociferous protests as we walk home; neighbours turn to see what is going on, cats hide, car alarms go off. When he bangs his head repeatedly against a wooden fence I am horrified: what if he damages the fence? I try to record the tantrum on the voice bit of my phone (some half-baked idea of playing it back later to shame him, or at least it could be produced in evidence at the Bad Mothers Tribunal), but I am so distracted that all I find later is some stressed woman whining "oh, it's not recording" ...
At home Hurricance Smallboy continues. A moment of calm, then further Boy 2 wailing when DVD player won't work. Ring Mr B for technical back up but he is not at desk. I have evil vision of him lounging around in colleague's room eating biscuits and drinking tea. Eventually get DVD to work but now time to fetch Boy 1 after cricket. Cue further wailing from Boy 2: he wants to be left at home on his own and I say no, he is only 7, I am not leaving him on his own till he is 30...

Get to school in car, Boy 2 appears and shouts at me "Go, Go" as if he has just pulled off heist of the century and I am his wheels. "How did the cricket go?" I ask. "Cuthbert got 4 people out" he says. "That's good" I reply. "No it's not!!" yells Boy 1, going an even deeper puce than his brother's earlier shade. (I am puzzled, my cricket knowhow is sketchy but I am sure getting people out is good).
"The people he got out were on his own team!" screeches Boy 1.
There follows a furious, sobbing explanation: Boy 1 went into bat with Cuthbert as batsman at the other end. Boy 1 hits the ball straight at the other team's fielder, so he shouts at Cuthbert "No, stay!" But Cuthbert runs anyway, forcing Boy 1 to run and so Boy 1 is run out.* The harshness of Boy 1's fate is underlined by the fact that this was his first go and he has spent hours waiting to bat. I comfort myself that this is Good Life Training, for example, if he ever attempts to fly with British Airways ("Sorry your flight is cancelled").
*Apparently this tactic worked so well that the unfortunate Cuthbert tried it successfully three more times, making for a somewhat strained atmosphere in the minibus home from the match. Names have been changed, so I apologise to any real cricket playing Cuthberts out there.
When Boy 1 hurls abuse at his chair at dinner (chair not behaving) and then unleashes the full force of his wrath at me, I really feel that I Have Had Enough. "Come home now" I tell Mr B reassuringly on the phone, "otherwise I will murder your children".

And guess what happens when Mr B arrives? Yes, of course, the boys are 110% adorable, so sweet and good-natured and eager to please. Mr B looks at me enquiringly as if to say "What is your problem?" 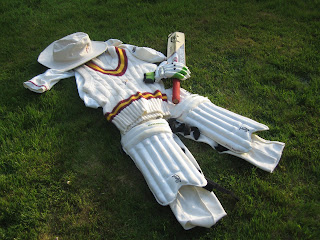 Email ThisBlogThis!Share to TwitterShare to FacebookShare to Pinterest
Labels: Boys 1 and 2, cricket, pants